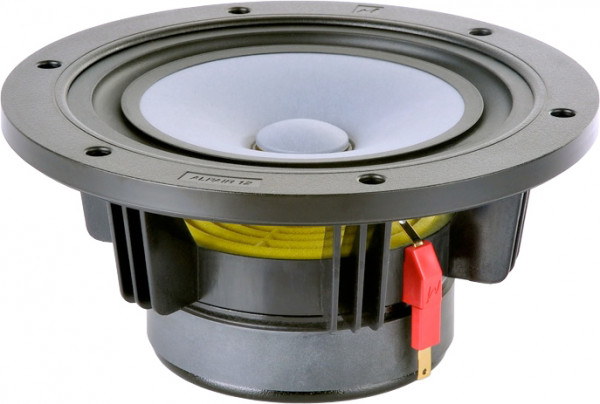 The Alpair 12P is the largest full-range driver produced by Markaudio. This driver is a development unit following on from the original metal coned Alpair 12 produced in 2009/2010.
Several major design changes make this Alpair radically different from the original in terms of its operation and performance.

Markaudio Alpair series drivers are totally custom designed and built. All components (apart from the magnet) are individually designed and engineered with their own tooling and mould making sets. Alpair drivers are made by highly skilled engineers, they arenʼt “mass produced”.

The change to a custom paper cone with a more shallow profile reduces mass and increases dispersion performance. The new cone is only 21-mm deep compared to the metal unit at 26-mm. The 12P employs and new custom CCAW coil with an aluminium/paper wrap, vented, lowmass thin-walled body. The spider is particularly special. Designed by Matsubara San, it employs a new long throw profile set together with a ribbed body to maintain linearity. The front suspension remains the same as the previous model; A design by Lu Yi Ping, its ultra thin wall doesnʼt support the cone. In terms of mechanical load performance, the 12P remains a single semi-free to air driver, possibly a unique design in its class.

The 12P remains pure to designer Mark Fenlonʼs current criteria which is to make purist, single cone drivers that are full-range capable without the use of phase plugs, co-axial centre tweeters or whizzers. The 12P is 92dB efficient (1w/m2), operating to 22-kHz (-3dB) and having a resonance frequency of 42Hz (+/- 2Hz). The 12Pʼs power-train (cone, cap, coil and
suspensions) is mechanically efficient and linear, requiring only modest powered amps to make it perform well. This driver is aimed strictly at the “audiophile” end of the market. Its cone is highly-resonance sensitive so clean low-distortion amplification and source components are advised.

For those listeners who value absolute detail, dynamics and clarity, the Alpair 12P is an excellent candidate. Iʼd like to thank all those who assisted in the design and development process, especially existing Markaudio driver users, whoʼs feedback was instrumental in the 12Pʼs final incarnation.